These are the vocabulary words that will be introduced in this lesson.

In English, sentences generally have at least one noun or pronoun. But in Konkow, as you saw in Lesson 2, a sentence without any noun or pronoun is just fine.
We gave as an example só:n. “They released him.”
This came out of the story of Coyote and the Turtle Girls, and the translation was clear because of the context of what was going on in the story. Without that context, só:n could also mean “He released him” or “she released them”. It’s a perfectly good sentence, in any case.
However, Konkow does have a very rich pronoun system. We will start by showing you the subject and object pronouns. Examine the chart below.
1st person subject object
singular ní ník
I me
dual nísa:m nísa:
we(two) us(two)
plural nísem níse
we (more than two) us (more than two)
2nd person subject object
singular mí mín
you you
dual mímem míma:
you (two) you (two)
plural mímem míme
you (more than two) you (more than two)
3rd person subject object
singular mým, mómis mý, mó
he, she, it him, her, it
dual mýsa:m mýsa:
they (two) them (two)
plural mýsem mýse
they (more than two) them (more than two)
The 3rd person singular pronoun mó is less common than mý. You can just use mý in your own speech if you like, but you will occasionally see mó in the stories and other sentences.


NOTE that except for singular “I” and “you”, the subject pronouns all have an -m at the end, just like nouns do. Object pronouns are “bare”- that is, no -m. Another thing to notice is that the pronouns differ according to whether they refer to just one, or two, or more than two people. Think of all these words as having a set of components that go together. For example, first person dual subject has three pieces: the pronoun root ni “first person”, -sa: “dual (two)”, and -m “subject”.) We can represent the parsed pronoun and it’s translation like this:
nísa:m
ní
first.​person
-sa:
dual
-m
subj
ours

So you don’t have to memorize 18 pronouns – just memorize 6 components and the order they go in.

The exceptions are these:

It may be helpful to put images with the pronoun concepts we are trying to explain. In the diagram below, the pronouns are grouped into 1st person, 2nd person and 3rd person and by singular, dual and plural occurrences. Their english translations are also given. 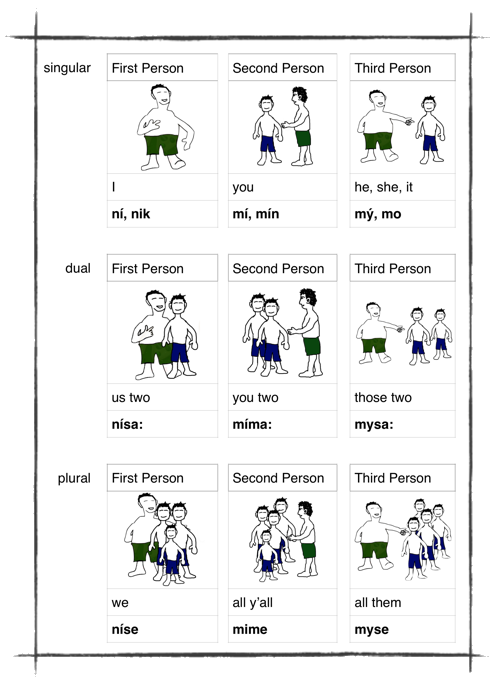 Exercises 1 Fill in the pronoun

Using the English translation as your guide, put the correct pronouns in the following sentences. Say the sentences out loud, too, for practice. (We aren’t separating all the components of each word, but you should recognize a few components here and there.

Place these pronouns into the sentences below.

He must have sung.

If you plural catch the fish, I will roast it.

(both of these pronouns are subjects.)

We two are reading.

I gave it to you alone.

Tell me a story!

He must have sung.

If you plural catch the fish, I will roast it.

(both of these pronouns are subjects.)

We two are reading.

I gave it to you alone.

Tell me a story!

As we said, you don’t necessarily have to use a pronoun or a noun in a Konkow sentence. When you read stories, there can be many paragraphs without using pronouns. When do they actually get used? Usually it is for emphasis or clarity, to distinguish one person from another.

Here are some examples from the Lost Swimmer:

píje:tonkàni.
pí
swim
-je:
move.​about
-to
around
-n
verb.​final
-kàni.
and.​then
They swam. [And then]
mým,   ʔàdiky,   jó:ki:n,   jó:ki:n.
mý
he
-m,
subject
ʔàdiky,
phrase.​marker
jó:kiT
dive
-in,
verb.​final
jó:kiT
dive
-in.
verb.​final
He dove and dove.
The first phrase above has no pronoun, but the second one does, because the subject has changed from a general group “they” to a particular person. But now that it was established that that particular person dove, the next line (13) is still about him, but without using a pronoun.
k’ána:nk’o:dojdi   jó:ki:n.
k’ána:n
bottom
-k’o:doj
place
-di
at
jó:ki(t)
dive
-in.
verb.​final
Way down to the bottom he dove.
Since English has to put in a pronoun, the translation has a pronoun even though there is not one in Konkow.
part 2 pronoun suffixes -k’i (possessive) -k’an (with) - EXERCISE 2

As you saw earlier in this lesson there are several suffixes that are added to pronouns. We learned about the three roots and the suffixes for dual and plural. For the subjective case an -m is added. For the objective case the pronoun root is simply used. There are two additional suffixes we would like to call attention to here with pronouns that end with -k’i (possessive) and ones that end with -k’an (with).

The pronoun tree below demonstrates the components.

Examples of the -k’i (possessive) and -k’an (with) suffixes on pronouns:

Fill in the appropriate pronoun in the phrases and sentences below.

You ought to have gone with him.

Is that your house?

But of course, that’s my food!

You ought to have gone with him.

Is that your house?

But of course, that’s my food!

part 3 pronouns plus -ha "do, be"
It is very common in the stories and elicited sentences to use a different form for first person singular. In place of the simple pronoun ni, we very often find nihaj. Usually, nihaj just translates as “I”, although Dr. Ultan explains that it literally means “it is I,” or “I am (the) one who….”
Here’s an example from Coyote and the Turtle Girls: Coyote sees the Turtle Girls swimming, and asks “How is the water?” They respond “It’s fine.” So then Coyote says:
níhaj bèlem mákpajkì:n.
níhaj
I
bèlem
also
mákpaj
try
-kì:
future
-n.
verb.​final
I too will try it.
níhaj   bèlem   mákpajkì:n.
ní
I
-haj
contrastive
bèlem
also
mákpaj
try
-kì:
future
-n.
verb.​final
Coyote said, “I too will try it”.
Using Ultan’s explanation, it would literally translate as “I am one who will also try it.”


Just like the previous examples, the word nihaj is present to emphasize that a new person, himself, is about to swim. There are a lot of these pronoun-like constructions. Some even incorporate two persons in the same word.
mìhani (or mìhano) you
mìnaj I to you
mỳhaj I to him/her

mìhani bíssàm
mì
you
-ha
aux
-ni
2nd.​person
bís
stay
-sà
habitual
-m
past
Were you in the habit of staying there?
míhano bíswononà:m
mí
you
-ha
aux
-no
plural
bís
exist
-wono
remote.​past
-nà:
subjunctive
-m
past.​tense
You could have been there.
mỳhaj c’ámmi: méjin.
mỳ
she/he
-ha
be
-j
1stperson.​subject
c’ámmi:
knife
méj
give
-in.
1stperson
I gave him the knife.
mỳhaj méjin, c’éboʔàn
mỳ
he
-haj
aux
méj
give
-in,
1st.​pers
c’é
see
-bo
permissive
-ʔàn
consequence
I gave it to him so that he could see it.
mìnaj píkydòwin.
mìn
you
-ha
aux
-j
1stper
pí
swim
-ky
agentive
-dòw
commit
-in
verb.​final
I’m going swimming with you.
What these really are, are pronouns attached to the auxiliary verb root -ha “be” or “do.” Here are the four forms analyzed:
nìhaj
nì
1.​pro
-ha
be
-j
1.​subj
I
mìhani
mì
2.​pro
-ha
be
-ni
2.​subj
you
mìhano
mì
2.​pro
-ha
be
-no
2.​subj
you
mìnaj
mìn
2.​pro
-(h)a
be
-j
1.​subj
I to you (h) disappears after a consonant
mỳhaj
mỳ
3.​pro
-ha
be
-j
1.​subj
I to him/her
So because -ha ‘be’ is a kind of verb, it carries person markers (-j, 1stpers.subj, -ni, -no, 2ndpers.subj nothing (∅) for 3rd person). person.markers can also occur on the main verbs of sentences. We’ll discuss them in a later lesson.
These are more common than the plain subject pronouns because they are more emphatic. So we see again, that pronouns are primarily used for emphasis.

Using the Konkow vocabulary you know, along with pronouns, write a short story. How many of the pronouns from this chapter can you use?

Fill in the blank spaces with the Konkow pronoun

Replace each underlined noun phrase with the appropriate pronoun
Example: mímem Are you and Hank going hang-gliding?

My brother is tall.
I like to walk in the hills.
Jen and Sara are friends.
My mom and her sister are dancers.
You two are great.
Me, you and Leanne are working on language.
All of them put on a dinner.
My sister and I go to pick acorns.
That job is really cool.
You are nice.

mỳ My brother is tall.
nìk I like to walk in the hills.
mỳsa Jen and Sara are friends.
mỳsa My mom and her sister are dancers.
mìma You two are great.
níse Me, you and Leanne are working on language.
míme All of them put on a dinner.
nísa: My sister and I go to pick acorns.
That job is really cool.
mí You are nice.
EXERCISE 7. Write the appropriate Konkow pronoun in the space below each image.
EXERCISE 8. Writing and speaking Konkow

As for all lessons, to really learn from this lesson you need to practice it and use it. Practice composing sentences of your own, using these pronouns and the vocabulary you have learned so far. Do the flashcard activities or use them in your own ways. Now that you know how to say “I” did something, you could start keeping a diary, where you write a sentence or two about your day.

summary
You learned the three pronoun roots:
Two “number” suffixes:
Three subject suffixes:
So you don't have to memorize 18 pronouns – just memorize 6 components and the order they go in.
There are some forms that don’t follow the regular pattern:
Mary Jones
The wonderful Mary Jones videos have lessons organized by topic rather than grammar, and are very good for learning conversational speech.

Want to learn more? All the Mary Jones videos lessons are available HERE

FLASHCARDS - LESSON 8
or you can download a PDF of the lesson here DOWNLOAD - LESSON 8
Each lesson has a set of flashcards that can be printed and used for practice. As you work through the lessons, the sets can be combined to create more advanced sentences. There are several fun games you can play using these flashcards. The cards can be printed either single or double sided depending on what and how you want to play. Three games will be outlined below.


Go Fish
This is a multiple player game. It can be played from a basic level with simply the vocabulary words, to a more advanced game where all the questions are asked in the language. At the most basic level, you can play with an open hand. The object is to get pairs and practice the vocabulary. You will need to print two or four copies of each card to play Go Fish and Concentration.


Concentration
This can be played individually or as a multiplayer game. Cards can be double sided or single sided. Pictures can be facing up or hidden. You can match pictures and/or words.The object is to find matches and pronounce the vocabulary.


Flashcard Drills
This can be played individually or as a two player game. One person shows the image to their partner, who says the Konkow word. This is repeated until each player can identify and pronounce each card in the stack. The amount of cards in the stack can be increased as needed.