distinctions between these two "thats"
will be described in Lesson 6

In Dr. Ultan's dissertation on Konkow, he talks about a "compounding suffix." The Mountain Maidu grammar book, by Karen Anderson who we are grateful to for sharing this concept, talks about it this way:

In [a previous lesson], we talked about the –m subject marker on nouns. There is another type of –m that is used to tie all describing and specifying words together in a phrase. Instead of just saying “coyote,” you might want to say “that coyote,” or “that big, bad coyote.” Or instead of just saying “a woman,” you might want to say “those three other hungry women.” Think of the noun as the star of the phrase. “Coyote” is the star of the phrase “The big bad coyote”. All the other words are just saying what kind of coyote it is.
In Maidu, all the describing words leading up to the noun (the star of the phrase) have to be linked together with -m suffixes, even if the noun is not the subject of the sentence.

Here are some examples from Coyote and the Turtle Girls: What they say about Mountain Maidu also holds true for Konkow. So the words that lead up to the "star" of the phrase can be called "describing words". We’ve been calling the suffix the “relational” suffix because it relates the describing words to the star noun.
pé:nem jábe:m jý:pyc’ok’om kátosam, ʔo:di.
pé:ne
two
-m
relational
jábe:
young
-m
relational
jý:pyc’ok’
girl
-om
subject
káto
play
-sa
dual
-m,
pluperfect
ʔo:
rock
-di.
locative
two young girls were playing on the rock.
“Girls” is the star of the sentence, so that -m is the subject marker. The two words before that have the -m that describe what kind of girls. (kátosam is the verb of the sentence, so that -m is yet a different kind of -m, so you can ignore it for purposes of this lesson.)
ʔàmamjý:pym   mé:nkani,   mỳjemkóle:kan
ʔàmam
that
-jý:py
girl
-m
subject
mé:
grab
-n
neutral
-kani,
and.​then
mỳjem
that
-kóle:
boy
-kan
with
that girl grabbed that boy (Coyote). 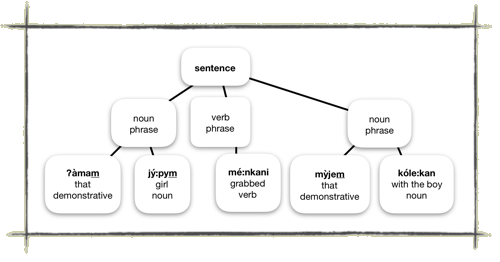 This sentence has two noun phrases – the first one is the subject so “girl” is marked with the -m subject marker. The second noun phrase is the object, so “boy” does not have an -m. But in both cases, the words for “that” have the -m that ties it to the noun.
NOTE: if either the describing word or the “star” noun ends in a consonant, add -im instead of -m. The -m on the describing words acts the same way as the subject marker.

Another note: kóle:kan means “with (the) boy”.

So if you use the verb root mé: which has been translated as “grab”, the object of grab has to have that suffix -kan. (Remember that in the exercises.)

In the sentence above, the object noun phrase comes after the verb. Remember that in Chapter 2, we showed objects before the verb. So you see that it is fine to do it either way.

Some describing words can be made into verbs, too. For example, ʔetiti “green” with the verb final suffix -n on it becomes ʔetitin “(It) is green.”

This is directly from the story of the Lost Swimmer. Ultan always puts the describing words together with the noun as a single word. We think it is easier to read if we write them separately. But as you study the texts, you will see them as Ultan wrote them; so this exercise is to help you learn how to pick the words apart.

See if you can rewrite that noun phrase with the words separated, and put dashes between the roots and suffixes. You can label the parts of each word if you want to. In the text analyses we are calling the suffix a " relational," because it serves to relate the descriptive words to the star noun.

Here are some describing words that you can use to make noun phrases. We are also adding the corrected words for “girl” and “girls.” Combine these with the vocabulary from Lesson 1 to do this exercise.

Descriptive Words
hél, helpe big
jábe: young
ʔetiti green
ʔékylkyl bluish
ʔáma that
wýkte one
péne two
siʔympe playful
Nouns
jý:py girl
jý:pyc’ok’o girls (two)
býsa: cane
ákc’olma turtle
ʔo: rock
séwi river
kóle boy
Translate these sentences into Konkow. Make sure that the subject of the sentence gets an -m suffix, and that all the describing words get an -m even if the noun is not the subject. (You don’t need to separate the suffixes with a dash when you write the sentence, but you can if you want to.)


The two young girls looked at the green river.

Word order is variable. These answers each have one of the possible orders, but others are okay too.

looked at the green river.

Hit Check to see if you have them all correct
summary

Mary Jones
The wonderful Mary Jones videos have lessons organized by topic rather than grammar, and are very good for learning conversational speech.

Want to learn more? All the Mary Jones videos lessons are available HERE

FLASHCARDS - LESSON 5
or you can download a PDF of the lesson here DOWNLOAD - LESSON 5
Each lesson has a set of flashcards that can be printed and used for practice. As you work through the lessons, the sets can be combined to create more advanced sentences. There are several fun games you can play using these flashcards. The cards can be printed either single or double sided depending on what and how you want to play. Three games will be outlined below.


Go Fish
This is a multiple player game. It can be played from a basic level with simply the vocabulary words, to a more advanced game where all the questions are asked in the language. At the most basic level, you can play with an open hand. The object is to get pairs and practice the vocabulary. You will need to print two or four copies of each card to play Go Fish and Concentration.


Concentration
This can be played individually or as a multiplayer game. Cards can be double sided or single sided. Pictures can be facing up or hidden. You can match pictures and/or words.The object is to find matches and pronounce the vocabulary.


Flashcard Drills
This can be played individually or as a two player game. One person shows the image to their partner, who says the Konkow word. This is repeated until each player can identify and pronounce each card in the stack. The amount of cards in the stack can be increased as needed.